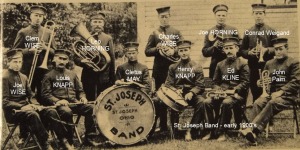 Pictured at left is a photo of the St. Joseph Band, taken in the early 1900’s.

You can click on the photo to see an enlarged version – which I recommend if you wish to read the annotations listing the names of the band members.

One of the band members shown, the dapper-looking fellow with the mustache, who is seated second from the left in the first row and is holding a clarinet, is identified in the picture as Louis KNAPP. However, I believe him to be Lewis Joseph KNAPP, my husband’s great-grandfather and father of John Lewis KNAPP.

It is interesting to note that almost all of the band members, with the exception of two, are probably related to the KNAPP-KLINE clan in some fashion.

Only Conrad Weigand and John Palm are not related to either a KNAPP or a KLINE – at least as far as I know.

This photo is featured on the front cover of a book entitled, Randolph, Atwater & Rootstown Revisited: Includes New Milford & St. Joseph, published in 2000 by Heritage Publications of Brady Lake, Ohio. This company published a series of books about local history, featuring great photos and interesting articles about surrounding communities in Portage County, Ohio.

During the next few weeks, I will try to figure out what happened to each of these gentlemen – and share their stories with you. I will also explain exactly how they are related to the KNAPP-KLINE clan (if they are related).

It will be interesting to see what kind of surprises may turn up – so stay tuned!