Towner’s Woods, a burial mound and a Hopewell princess 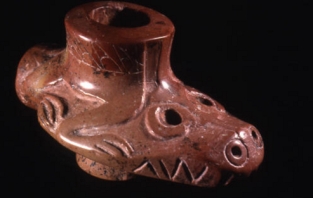 While surfing the net doing some genealogy research this morning, I ran across a Kent State University student’s thesis about the archaeological find in a Portage County Metropark. Chloe E. Bragg’s Towner Mound: Creating Content and Sparking Curiosity for the Portage County Parks answered some questions for me.

As many of you know, I am not a Portage county native, so whenever someone starts talking about Portage county local history, my ears perk up. Such was the case when on one of our dates, my husband took me to Towner’s Woods for a hiking excursion. One of the things he pointed out to me while we were hiking was the Hopewell burial mound that had been found there.

Of course, as soon as I heard about that, I wanted to know more. Just like the newspaper reporter I used to be, I had a hundred questions:

Well, if you’re as curious about that as I was, you can click the link to Chloe Bragg’s thesis and read more about Towner’s Mound. You can also visit the WordPress site that Chloe built to give park visitors more information about Towner Mound. I hope the Portage County Parks folks incorporate Chloe’s work into their website soon. It’s a significant improvement on what they have posted on their site now.

When the Towner Mound site was excavated, one of the burials was reported to be that of a Hopewell princess. It is said that a guardian spirit watches over her tomb and will harm anyone who disturbs her rest.  One supposed incident occurred in the 1950′s, when the guardian left strange claw marks on the car of some teenagers who camped on this mound. It is also said that the spirit of a pioneer widow, who was murdered by neighbors over a land dispute, wanders these trails along the outskirts of the park.

Not having been there at night, I can’t say whether those stories are true or not. And since the park closes at dusk (if you’re caught there after dark, it’s considered trespassing), it doesn’t look like I will be verifying those stories anytime soon. However, my husband used to go mountain biking at night through Towner’s Woods — but nothing unusual ever happened to him or his cousin, Tom.

There is also talk of some tunnels in the area. If you know anything about the tunnels or just have an interesting story to tell about one of your own visits to Towner’s Woods, please share it with us.

For more about Ohio’s Hopewell, visit Ohio History Connection. The photo of the pipe above is a Hopewell pipe found near Sandusky, Ohio, at the Esch mound.

DeadOhio has a discussion about Towner’s Woods being haunted. Scroll down to read the comments to learn more about those tunnels.

Ohio Exploration Society. Founded in the summer of 2000, the OES is a group of urban explorers who visit both well-known historical locations and those forgotten with time. OES members research and photograph locations and share their research and photos online. This group has documented some interesting sites. They have a section on Portage County sites, including Towner’s Woods, as well as a host of other interesting sites.

6 Responses to Towner’s Woods, a burial mound and a Hopewell princess