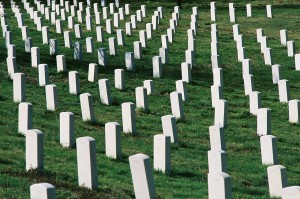 I ran across an interesting story running on MSBC today.

It seems the U.S. Army has drafted the troops of its historic Old Guard to photograph 219,000 grave markers and 43,000 sets of cremated remains in Arlington National Cemetery in order to clear up any confusion over who is buried where in the cemetery.

But this mission is a little different…

The three-month operation is called Task Force Christman, in honor of Pvt. William Christman, a Civil War soldier who was the first soldier buried at Arlington.

The troops given this assignment are from Delta Company, 1st Battalion, 3rd U.S. Infantry Regiment, known as the Old Guard — the Army’s official ceremonial unit. The Old Guard escorts the president and conducts military funerals.

Armed with iPhones to take photos and an iPad with a chart showing grave locations, about 60 soldiers enter the cemetery after it closes for the night. They work in pairs, one shining a light on the grave marker while their partner snaps a photo.

They work at night to avoid because it’s cooler and no funerals are conducted at night. Shorts and flip-flops are worn in place of their normal dress uniforms.

Why are they doing this?

As you may remember, in 2010 a scandal erupted over mismanagement at the cemetery involving unmarked and mismarked graves. Congress has since mandated that the cemetery account for the graves of more than 330,000 people buried at Arlington.

After the photographic study is complete, the photos will be compared to existing records and hopefully any discrepancies that are found will be cleared up.

Eventually, the government hopes to create an online database of the information for the public.

You can view photos and read more about Task Force Christman by clicking the links below.

View photos of soldiers who are part of Task Force Christman