Remember when I started this series of blog posts I said that only two members of the St. Joseph band had no apparent connections to the KNAPP-KLINE clan?

Not intentionally, of course. But while researching the coronet player in the group, I did find a KNAPP connection. I am not sure yet exactly what it means, but there is definitely a possibility that John PALM is related to us, too.

Searching on ancestry.com. this week, I looked at all John Palms in Portage County, Ohio that were born after 1880, because judging from his picture, he looked like a relatively young man, perhaps in his 20’s. Since I knew the picture was taken sometime in the early 1900’s, I guessed he was probably born sometime after 1880.

A general search can return almost anything, from a Census entry to a birth or death certificate, to a military record. What turned up in this case were two WWI draft registration cards. Click on the thumbnail of the two listings I found on ancestry.com.

So there were TWO John Palms in Portage County at during that time – and both of them were very close in age.

So which John Palm was the one pictured in the St. Joseph Band photograph?

When I looked at the actual images of the draft registration cards, there were a few important clues.

First, John Adam Palm listed an address on Sycamore Street in Ravenna as his address. His occupation was “wood worker” for Buckeye Chain.

He listed a Mrs. Josephine Palm as the person who would always know his whereabouts. If you look very closely, you can see the word “wife” written in parentheses next to her name.

So this John Palm was married and living in Ravenna – which in the pre-automobile days was a long ride/drive via a horse or buggy. Plus he was working, supporting a wife – would he have had much time to be in a band that was a considerable distance from his home?

When I looked at the other John Palm, there were important clues there, too.

John Palm #2 lived in Suffield Township and listed his occupation as farmer. Plus he listed Michael Palm as the person most likely to always know his whereabouts. It didn’t list the relationship between Michael and John, but I suspect he was a close relative, probably a parent, brother or uncle.

The odds were favoring (Suffield) John Palm over (Ravenna) John Adam Palm as to which one was the John Palm pictured with the St. Joseph Band.

In the days before the automobile, people generally stayed fairly close to home for their amusements. I don’t think John Adam Palm would have been likely to venture all the way to Randolph to play in the St. Joseph Band. It would have made more sense for the John Palm who lived in Suffield Township to be a band member.

So I started checking the Federal Census for more information about each of the two John Palms. You cannot always make assumptions because sometimes people do some pretty strange things…

The 1920 Census provided a very valuable set of clues that helped me figure out which John Palm I was seeking. Click on the thumbnail shown at left to see a larger image.

In contrast, when I looked at the Census listings for Suffield Township’s John Palm, this made a lot more sense.

And most interestingly of all, a gentleman listed as “Adam Napp,” was also living in the household in 1900. The 1900 Federal Census is a handy tool because it lists the relationship of each person to the head of the household. This is how I know that “Adam Napp” was John Palm’s maternal grandfather because Adam is listed as Michael’s “father-in-law,” making him John’s maternal grandfather.

Hmmm….is it possible that a census taker had spelled Adam’s last name the way he heard it? Could his name really be Adam KNAPP instead?

This is a strong possibility. I have seen KLINE spelled several different ways for the same family on successive census reports: CLINE – KLEIN – KLINE have all appeared.

Then on the LDS site www.familysearch.org, I ran across a christening record for John Palm – and it listed his parents as Michael Palm and Cathan KNAPP. It appears the priest who recorded the christening information must have abbreviated Catherine/Katherine as “Cathan.” 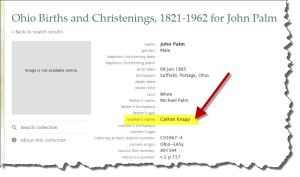 This confirmed that Michael Palm had indeed married a Catherine/Katherine KNAPP. This gets more interesting all the time.

So where does Catherine/Katherine KNAPP fit into the picture?