Some of you may have noticed that I haven’t been posting quite as often lately.

I did take some time off after the 2010 Knapp Family Reunion. It was great fun – but I had some other things I needed to catch up on. Plus a little downtime, relaxing with the family and a few good friends – doesn’t hurt, either.

One way I relax is by noodling around on my computer and doing genealogy research.

This week I decided to try and figure out what happened to a son of Matthias TRARES, our immigrant ancestor on the TRARES side.

To refresh your memory: Matthias TRARES was born Feb. 1871 in Hesse, Darmstadt, Germany. He emigrated to Ohio sometime between 1835 and 1838 with his wife, Elizabeth HELMLING, and his children:

How do I know approximately when Matthias TRARES and family left Germany?

I decided to play detective and figure out what happened to some of the other members of the family. I started with John Sebastian TRARES because men didn’t change their names when they get married like women did during that time period. So they are easier to trace.

I had one thing going for me: TRARES is a relatively uncommon name.

Usually, if you see that name, chances are they are related in some way. That makes genealogy research a little easier. Not like researching the SCHMID side of my own mother’s family, for example.

Do you have any idea how many SCHMIDs there are in Ohio????

One of the first things I do when starting out a search is to perform an internet search on a person’s name. You never know what may pop up. I will also do an image search to see what I find.

Well, I got a surprise when I did both on John Sebastian TRARES.

As it turns out, there is a building known as the John Sebastian TRARES building located in Edwardsville, Ill., (in Madison County), that is listed as a local landmark. Hmmm….

Here is a link to the City of Edwardsville’s website. You can check it out for yourself.

But this is what I found below. You can click on the thumbnail image to see a larger version.

Then I noticed a listing for the John Sebastian TRARES home.

Apparently, the Edwardsville schools does a History Walk each year and takes photos and posts them to their site. The kids get to talk to people dressed in period costume who are playing the part of founders of their town. Kind of a neat idea and great fun for the kids, I’m sure.

But one of the photos was of the home of John Sebastian TRARES. Hmmm…it’s a pretty sizable home, built in the Empire style. Obviously, this was a pretty influential member of this community.

Here’s a picture of the home: 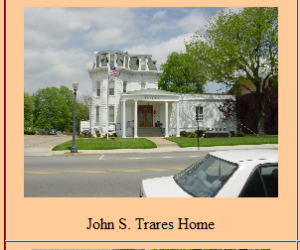 Wow! An Empire-style mansion! This guy must have been quite an influential man in the community at that time.

Well, that just intrigued me all the more. Obviously, this guy was probably not farming if he was able to afford such a fine home right on Main Street in downtown Edwardsville.

Stay tuned for tomorrow’s post when I tell you the rest of the story of what happened to John Sebastian TRARES and his family.