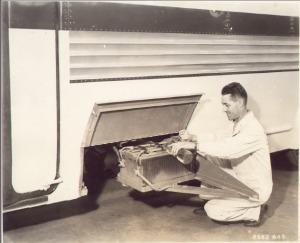 John Lewis KNAPP was good with his hands – if it had an engine and four wheels, he could fix it! He put his mechanical aptitude to work as a mechanic at the Twin Coach Company.

According to my husband’s uncle, Don Knapp, his dad was responsible for keeping the owners’ personal motorcars running. He was also heavily involved in helping the founders with their brief venture into the sport of auto racing, including a car that ran at the famed Indianapolis Speedway.

But more from Uncle Don on that later. Don has promised to provide more information about his dad’s venture into auto racing that will be featured in a later post.

First, some background on the Twin Coach Company.

Founded in Kent, Ohio in 1927 by brothers William B. and Frank R. Fageol, the company started making trucks in California during World War I, as well as automobiles for domestic use. They brought their “Safety Coach” east in 1923, and settled in Kent, Ohio in 1924 as the Fageol Motor Company.

The company was sold to American Car and Foundry Company of Dayton, Ohio, in 1925.

In 1927, the Fageols’ developed a new form of public transportation called the “Twin Coach,” the first urban motor coach. The Fageols re-established themselves in their original Kent location as the Twin Coach Company.

The Fageol Motors and Twin Coach companies were instrumental in the history of public transportation in the United States. The dual-motored “Twin Coach” was the first urban transit or streetcar-type motor coach. The Twin Coach Company ranked second in urban bus manufacturing for approximately twenty years. The company also manufactured airplane parts and machine engines, as well as a new house-to-house mail delivery truck called the “Pony Express.”

In 1958, Twin Coach sold its marine engine business and moved its headquarters to Cheektowga, New York. In 1962, stockholders approved a name change for the company and the Twin Coach Company became Twin Industries Corporation.

I am willing to bet that no one knows there is a “Twin Coach Song.” This is sung to the tune of the Army song “Those Caissons Keep Rolling Along.”

Then it’s Hi Hi Hee
The Twin Coach Company.
Chins up, our zeal will never lag,
With all our might
We will win the fight
For our country, our Home and our Flag.

If you wish to learn more about Twin Coach and its history in Kent, here are a few links to some websites you might find interesting:

6 Responses to John Lewis Knapp and the Twin Coach Company